((More story time about Vaelanys and how he ended up with his garrison. The part of Damarianth (top screenshot) is played by Seish, who got his hair done for the first time ever for the role.)) 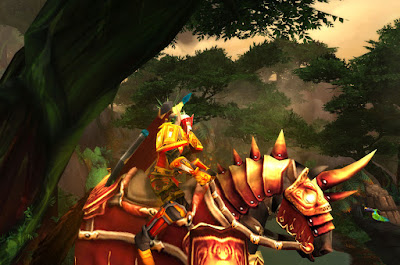 The Dark Portal was worse than he had ever imagined. He thought it had gone worse than any of them could have envisioned. Vaelanys had expected battle. It had been almost a massacre. Damarianth's Lynxes had been a proud company, nearly fifty strong, but they were routed, more than half their number lost. What remained fled before he and the paladin beside him, a long, straggling, broken line whose beginning was out of sight in the jungle. He thought the rest of the Horde's forces had lost even more.
He hadn't escaped unscathed. He wasn't sure any of them had, but the pain in his wounded leg was minor and troubled him far less that the distant sounds of battle behind them. He and Damarianth turned as one to look, but for the moment there was neither pursuit nor the more welcome sign that some straggling Lynx would have been. Neither of them spoke, though when the paladin tugged the reins to keep his charger at a walk, Vaelanys mirrored the gesture and felt the hawkstrider tense under him, ruffled feathers scraping at his leathers.
They watched the last red and gold tabard vanish over a small rise ahead of them, and once more Vaelanys looked over his shoulder, and then back at the dense trees ahead of them, wondering if what they were running into was really any better than what they fled. "Where will we go?" he asked finally and was pleased to find that his voice sounded calm and steady even if he felt nothing of the sort.
"I don't know." The paladin tucked one gauntleted hand under the opposite elbow, pulling the heavy glove off long enough to let his bare fingers push sweat and hair from his eyes. "Have to find a place we can retreat to and try to fortify. Regroup, tend the wounded then see if we can contact any of the Horde forces that are left." If there were any left.
Vaelanys nodded. What neither of them said was that all that depended on whether they even survived the jungle. "Are they okay? At the front?" His head tilted slightly in the direction the vanished line had gone.
"Kieryl's at the front. He'll be watching them."
They both turned another look over their shoulders. But no more red tabards straggled into sight, no more fleeing mounts ran past them. More than half. He had known them only a week and Vaelanys's heart ached for it. He couldn't imagine what Damarianth felt. None of it showed in the paladin's face, but Vaelanys knew the look of a noble's composed mask when he saw it. He wore it often enough himself. "Let's catch..." But before he'd even finished the words an earth shattering roar made Tyrn spin beneath him. He caught a brief and dizzying glimpse of what looked like a moving hillside before he steadied the warstrider beneath him.
"Light..." In the ringing silence that followed the roar he heard Damarianth's prayerful whisper. Both of them stared up at the Gronn. Into its single mad and furious eye and then higher to the heavy cannon mounted on its hunched shoulders.
The bottom dropped out of Vaelanys's stomach, and for a moment his hands on the reins were numb. Beside him Damarianth seemed similarly frozen, but it was the paladin who moved first, slowly tugging his gauntlet back on and then very deliberately reaching up to loosen his shield and mace from his back. Vaelanys stared at him, but the paladin's eyes were fixed on the gronn.
Damarianth couldn't mean to fight that. There was no way the two of them could possibly win. But then it moved again and Vaelanys understood. It covered what felt like half the distance between them in a few strides. It had been only moments since the last of the Lynxes had vanished from sight. One numb hand lifted over his shoulder to close on his staff.
"Get them out, Vaelanys." The paladin's eyes stayed on the gronn. "You keep my people alive and you get them out. Do you understand me?"
"You can't stop it, Damarianth. No one could. I can't let you..."
"That is an ORDER, Sunthorn. You get my people. And you get them out."
"There has to be another way." His own jaw set as he stared up at the gronn and it moved again.
"Now! Go." The paladin heeled the reluctant charger forward one walking step. "And tell Kieryl..." Their eyes met as for the first time since the gronn appeared Damarianth looked at him, but a second later the paladin shook his head and turned away. "Never mind, I'll catch up. But don't let them wait. Keep them alive. GO!"
"I will try." He obeyed. Vaelanys hated himself for it even as he did but he turned Tyrn and heeled the strider away.
Behind him he heard Damarianth yell and one glance over his shoulder showed him the paladin, long white braid whipping behind him as he rode the charger straight at the gronn. "Fangs of the Eversong!"
He didn't look back a second time and he felt like a coward as he dug his heels into the strider's sides again and leaned forward against the feathered neck. But he didn't want to even hear what would happen. Sunwell, he did not want to hear that. 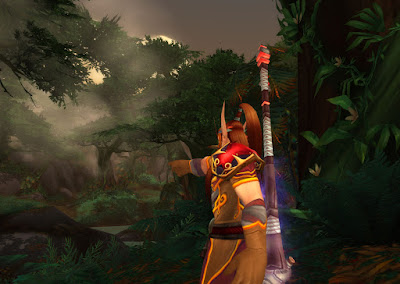 ***
"We can't wait any longer." Vaelanys told the weary, dirt smudged, rebellious faces around him. He'd disobeyed that much, let them wait a few moments miles away in the lee of large stone, though it had been more for the wounded than any real hope for Damarianth. "We have to move."
"WE'RE NOT LEAVING!" Kieryl snapped at him, throwing his shield to the ground at his feet. "We're not leaving him. YOU might be coward enough to run and leave him to fight alone, but the rest of us will stand with him."
Vaelanys's own anger rose, along with his own stinging hurt that he knew was no match for the smaller paladin's agony. The butt of his staff slammed the ground as he stood. "I followed ORDERS! And he told me to go and he told me to get you out and I will be damned to a place worse than this if I fail! Now get the rest of them up, get the wounded up and MOVE!"
"Then you can go straight to wherever that is." Kieryl snarled. He could see the muscles working as the smaller paladin's jaw clenched tight. "Because I'm not leaving him."
He understood, Sunwell but he understood the pain in Kieryl's voice and face. It tore at him until it took every ounce of his own control to keep it from showing in his features. "You are." He said firmly. "Either on your own feet or hog-tied over Tyrn's back. He gave me an order. He gave us an order and we are going to obey it. Pick up your shield."
It surprised him a little when after spitting at his feet the smaller paladin obeyed, picking up his shield and turning his back. Even through the plate he could see the angry set of Kieryl's shoulders. But that sign had been what it took for those that hadn't yet risen to begin, rising and tugging the worst of the injured to their feet.
"Get Anrastas onto Tyrn. I can walk." Vaelanys watched them move to obey, scooping the barely conscious warrior onto the warstrider's back. Tal'efir picked up the last tattered red and gold Lynx banner from where it had been propped up against the stone.
Kieryl stood a little away, his back to them, looking not the way they'd go, but back the way they'd come. His armor grated once with some small movement and Vaelanys wondered if he wept. But when he turned back his eyes were hard and bright and dry. "Where we going?" He demanded.
"Out of this jungle. Somewhere we can fortify." It wasn't really an answer but it was the best he had. "What we're going to do first is stay alive." He wished he had some balm for their grief, and for his own. "You can leave him a sign. I'm sure you have one, some secret sign for missions. Leave some as we go. If he can come he'll know where to look." It felt wrong to say it, to offer hope where he knew there was none but if it gave them even a fragile thread to cling to and keep moving Vaelanys would use it.
He didn't watch as Kieryl moved to scoop up rocks and scrape at the stone where they'd rested, but he waited until he'd finished and until they'd all begun to move out before he followed. Vaelanys didn't look back. His attention was focused on the way ahead of them and the promise he'd made. He'd never wanted this responsibility. He didn't feel qualified to handle it. But what he wanted didn't matter. It was his now. They were his now, to protect if he could, or to die like Damarianth in trying.
Posted by PlaidElf at 2:01 PM