A little rant about barns. 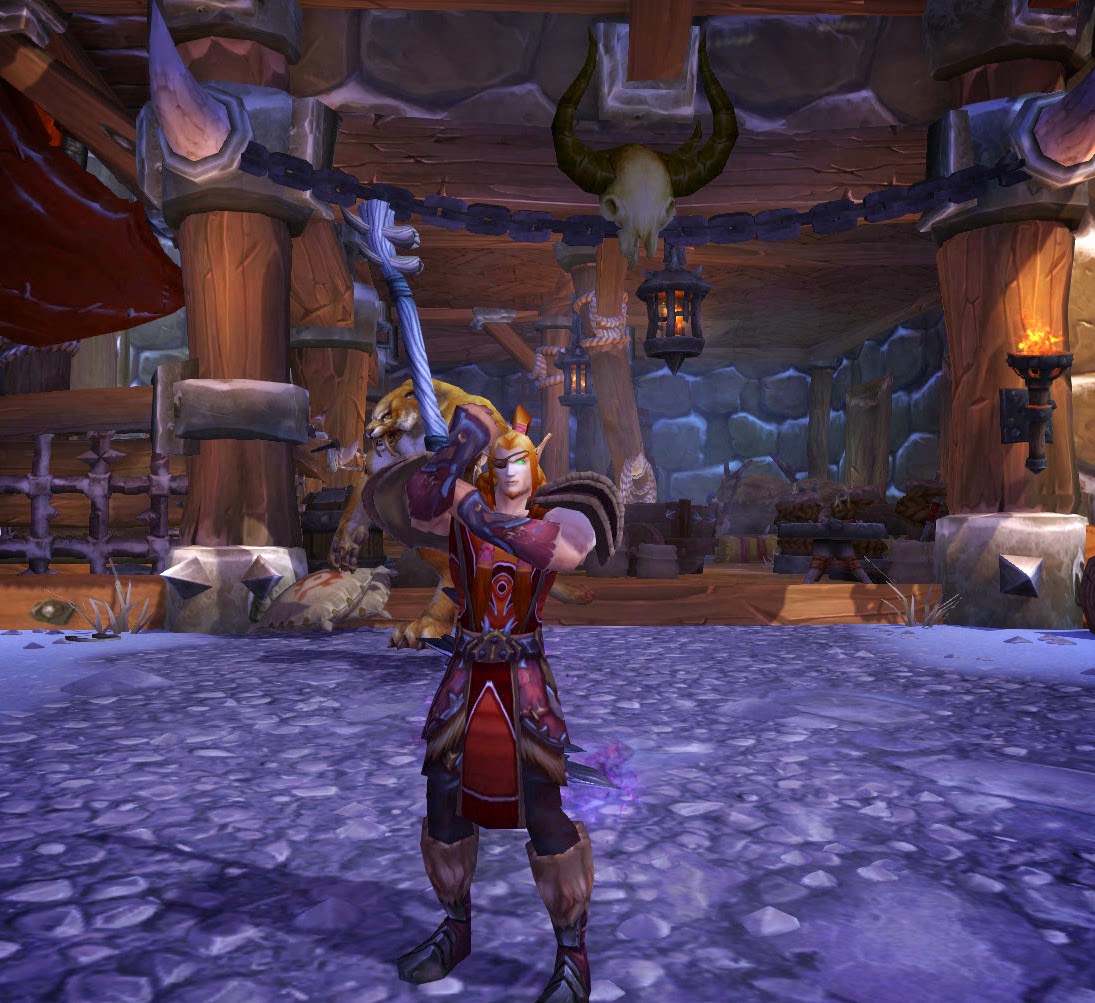 Cheerful holiday posts will have to come later, there is a cranky rant here that's been building for a while.
Tai's a leatherworker. It's a good profession for a monk even if it's always been a pain to level. This expansion's no exception. People who work with metal get a mine for them and all their alts, so the ore just flows in. People who work with herbs have to level some but they get their herb garden to do the same. If you work with leather, though you get to use up one of your building slots to make a barn. So it already annoys me that it took up a slot I wanted for an inn for materials other people get provided for free.
But I'll deal with that. I'll deal with the finicky traps and the fact that for some reason I couldn't seem to actually catch anything that would provide me with the leather I made the barn for until I got to Nagrand (around level 98). Finally got the barn producing leather and leveled it to three for the adorable pet but also for the chance of being able to farm up savage blood. But elites are no picnic for a healer who isn't that well-geared. Still Tai's usually got a tank to help him out and we split the savage blood.
But sometimes I feel bad asking for help for something that's basically busy work for my garrison and I go out and work on them alone. It takes a fair bit for Tai to beat one of those Clefthooves down low enough to trap them. And here's the part that makes me angry. I can deal with it being a project and taking me about five minutes per trap. What I can't deal with is that Blizzard set up the mob tagging for those elites in a way that allows someone to come along just as I get them down low enough and drop a trap and taunt. The clefthoof goes in their trap and I've just wasted all the time I spent working on it.
There's the variation on this where someone just comes along and nukes the mob down to zero before the trap catches too. Either way I spend a fair bit of time and get nothing out of it but annoyance and frustration. Especially when I go back to my garrison with my meager trap haul and walk by the mine and herb garden that produce so much free ore and herbs for friends and alts. I can't help feeling like other people get free materials and I get to use a building slot for another way for people to grief me.
I think the barn shouldn't have taken a building slot. But it does provide the chance of savage blood so maybe that's fair. But maybe we could at least change the rules for those traps so that they won't work on things not tagged by you or your party members? That still lets people work together, but maybe at least stops me from wishing those big traps worked on other players. And hey then the guy that nukes it down before the trap catches can still get in his daily dose of being a jerk too. But at least I don't have to be filling up barns for the Alliance at no charge.
Posted by PlaidElf at 10:39 PM 11 comments:

Another game of 'What do I have in my void storage?' ended with this mog for Tyl. I really like it. Think it may be one of my new favorite transmogs for him. 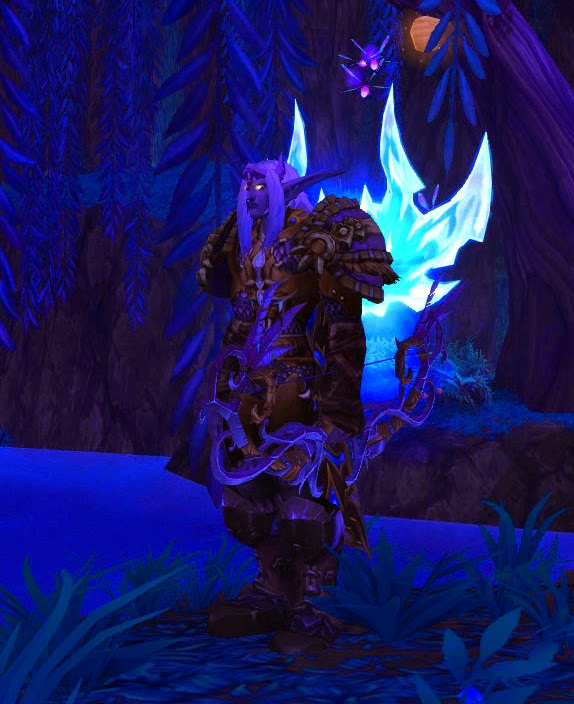 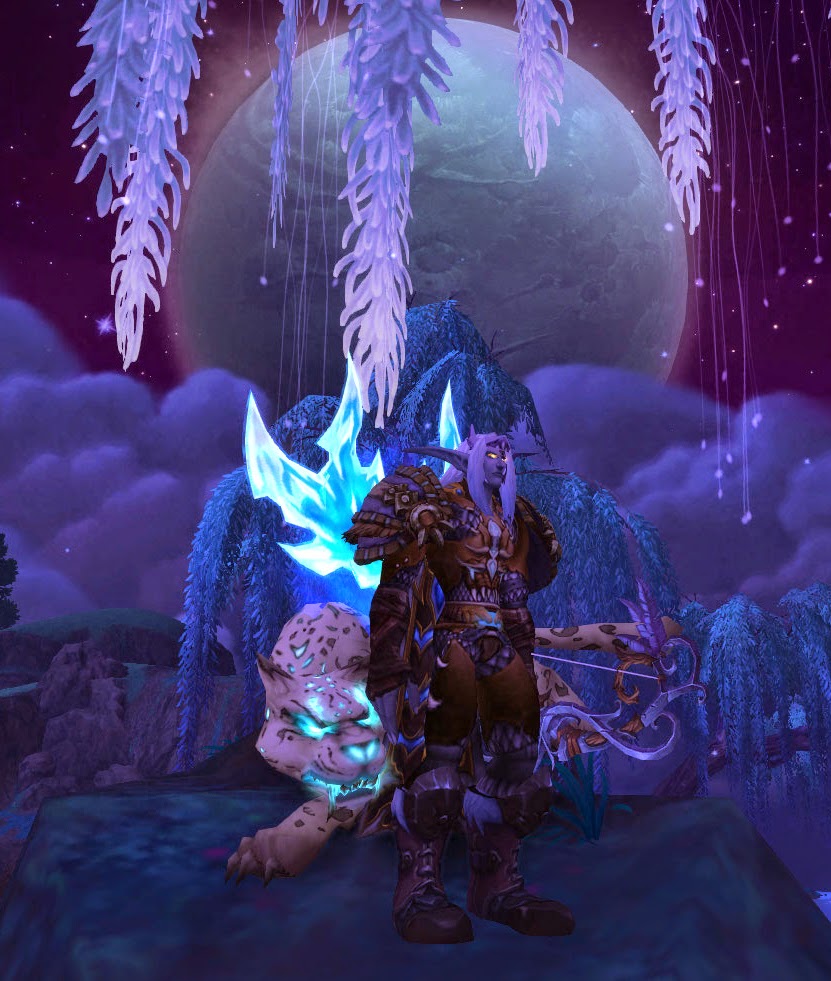 I really just couldn't resist making a mog for those shoulders because they look good on a male Night Elf. And I was happy for a mog that finally worked with that bow. Shadowmoon Valley is an irresistible backdrop for screenshots too. It looks very right for a Night Elf home far away from home.
Posted by PlaidElf at 1:27 PM 2 comments:

First of all I have to say I'm with Tome here. I've been slacking off on writing on my WoW blog not because I don't have anything to write about but because I've been too busy doing it to write about it. Warlords is keeping me busy. (And of course there's the holidays too.) I'm running three level 3 garrisons now: Tai's, Rim's, and Ailuuya's.  And a couple level twos that are mostly doing profession stuff and accumulating resources.
I'm trying to get Ailuuya geared so she can raid because I miss running with my raid team so much. She's close. I'm really hoping for next week. She'll have another crafted piece tomorrow and hopefully I can get her through a heroic or two and maybe the LFR. Today, though, besides her apexis daily and garrison missions she's managed to meet two of my WoW goals. 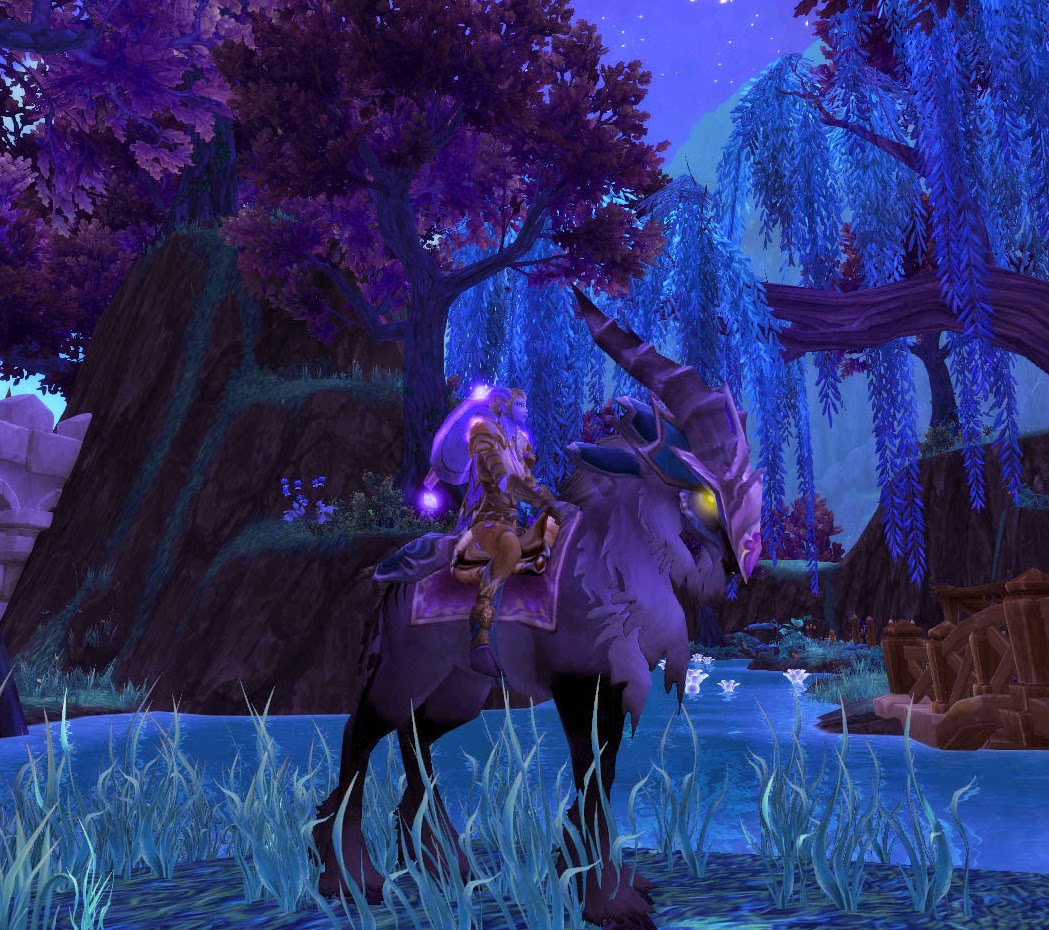 I love talbuks. They're still some of my favorite mounts, no matter how many new models they bring in and I wanted the dark ones for ages. But getting them involved pvp and even though a lot of mine are on a pvp server... no. Just no. But a while back Ailuuya got some of the battle tokens from a garrison mission. I put them in her bags thinking I'd have to hope more missions came up for them and save them. But today I finally looked them up and realized she already had enough for the Dark War Talbuk. And there he is. I'll still have to hope the mission comes up again so I can get the other one but I'm so happy about this!
And after Halaa had been claimed and the Talbuk purchased I thought while I was in Outlands I might as well fly over and pay Gruul another fruitless visit. Ever since I created Ailuuya I had one specific shield in mind for her. The most draenei of shields, but Gruul kept dropping trinkets for me instead. Only tonight he didn't. 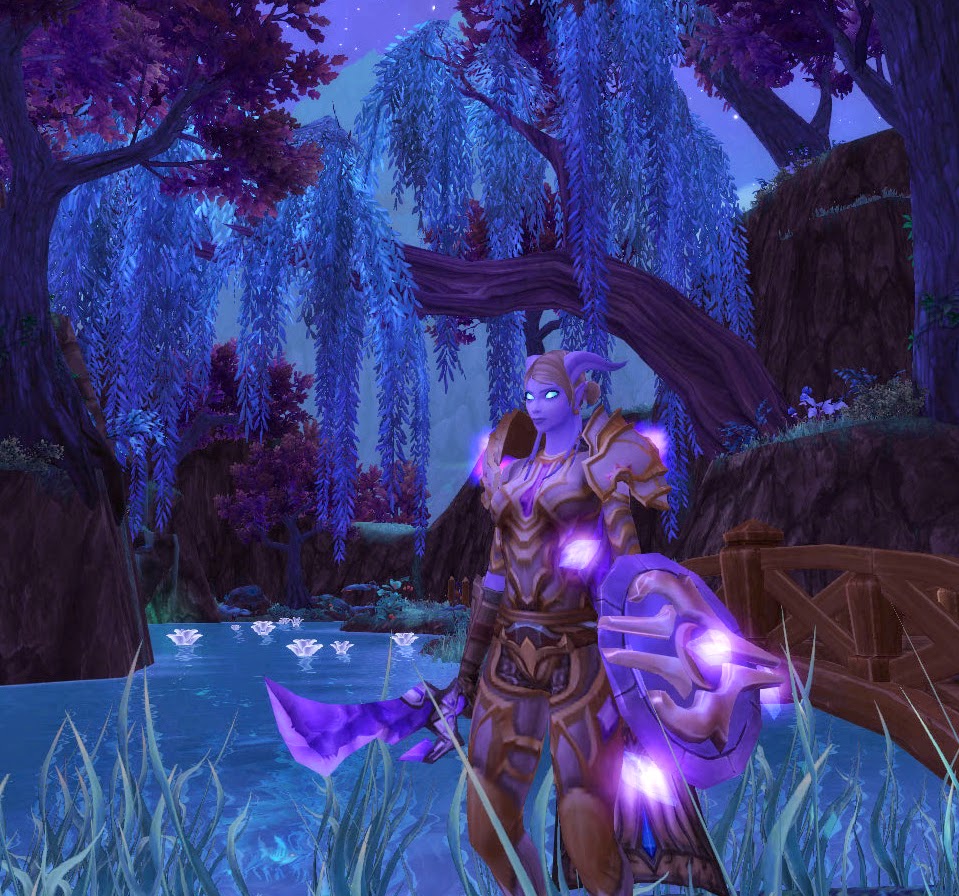 So of course I had to go transmog her even though I'm hoping to replace some of that gear tomorrow or the next day. And I'm happy. I think she looks great, and my many Gruul kills finally paid off so I don't have to do it any more.
Posted by PlaidElf at 1:56 AM 10 comments:

A strange feeling and some achievements.

Periodically I waste time on my phone looking at funny pictures on the internet. It's amusing, some of them make me laugh, other's make me shake my head. Yesterday one of them made me double take. It was a WoW thing, a split picture top and bottom comparing Vanilla and WoD. I read through all the little captions on the top one and then looked down at the bottom picture and stared thinking... Holy crap that looks like Tai. Staring at it a moment longer I realized it -was- Tai:

I am still not sure how to feel about this. After all nobody asked me if they could use my screenshot. And the point seems to be about how isolated WoW is now, when that screenshot was in a post where I was talking about my launch party and playing with friends. After all Tai never levels solo, even if I screencap him that way a lot. On the other hand I guess it's flattering? Except the part where I wasn't credited of course.

In other notes. I've got three at 100 now, Rim and Tai Horde side and Ailuuya on Alliance. Ailuuya is profiting from the things I learned making garrison missteps on Rim and Tai so she's doing fairly well for herself. Gearing is slowly happening and I've managed to get her silver proving grounds for both healing and damage without too much trouble. She hasn't queued for Molten Core yet, but she'll be able to whenever I want.
Tai has a stable in his garrison. I'd originally meant to do all that with Seish but he's still at 91 waiting for his leveling partner so Tai has taken over. All but one of the stable mounts have been tamed as of today, including this fine fellow. 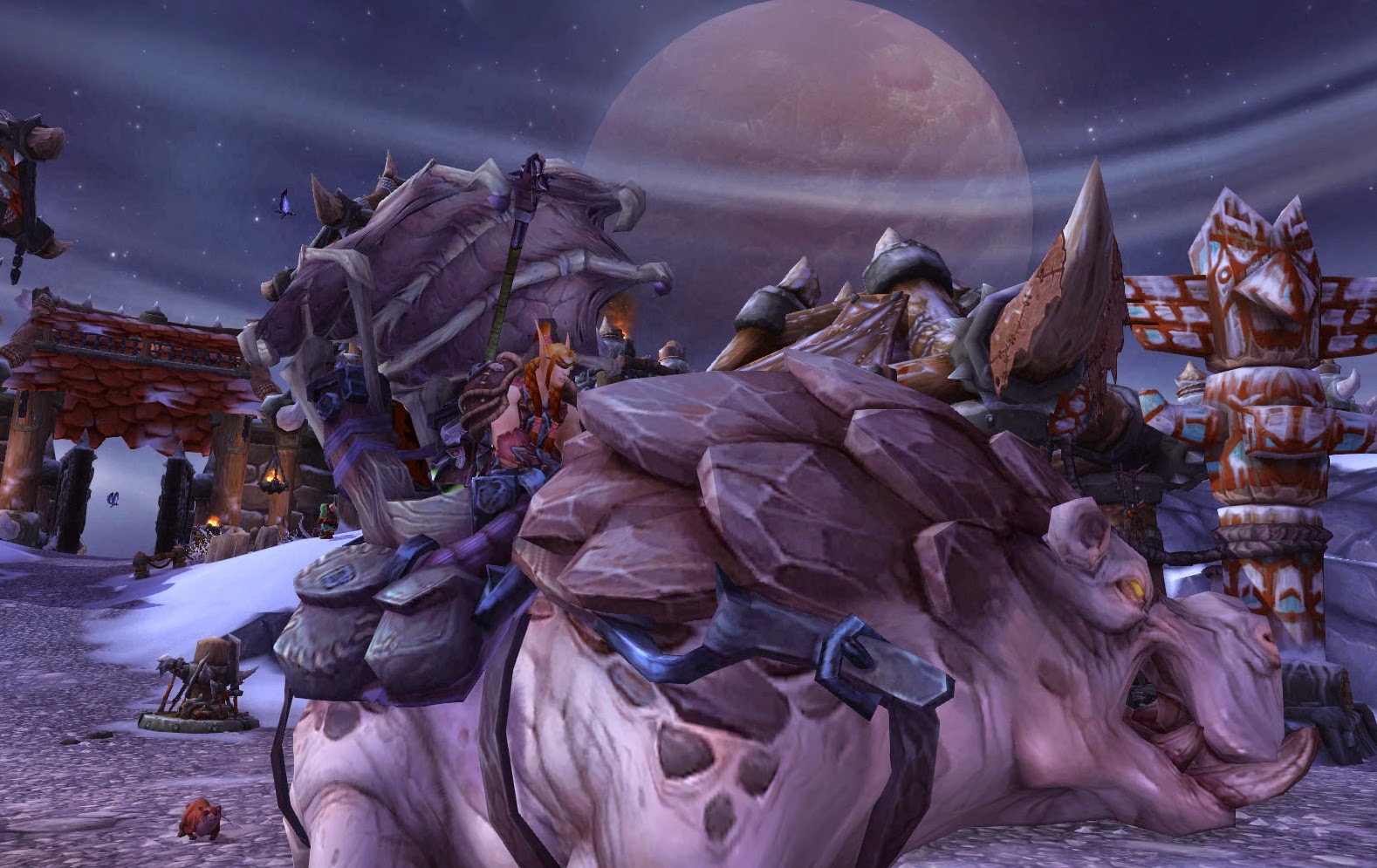 That put Tai's mount count for the achievement at 197, so just on a hunch I switched over to Seish.
And as I'd thought paladin mounts did it (Helps that he has the Argent Charger). I was too excited to screencap the achievement when it popped but it's maybe more impressive this way anyhow: