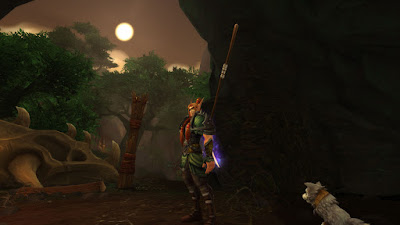 I've been spending a lot of time in Tanaan, and I've only even opened it with two characters. Tai and Os had gone ahead and finished all that stuff they hadn't bothered with before the patch. The rest of Nagrand for Loremaster, some exploration, some treasure hunting. The last few dailies for securing Draenor as they showed up on the table. So all that was left was the reps.
But the first night the day the patch hit I didn't even bother trying until late in the evening. I heard horror stories about lines and waits and I was in no rush to deal with that. No, the first thing I did in 6.2 was send Rim around to purchase a set of holy paladin plate heirlooms! 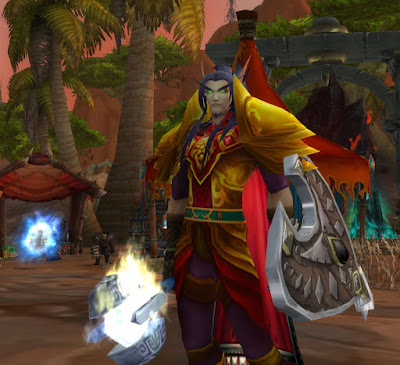 And if that might be a new little blood elf holy paladin wearing them? What of it? 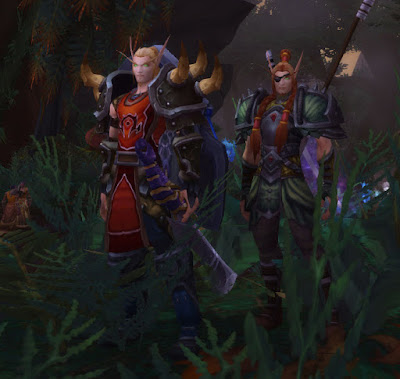 That evening and the next day both Tai and Os and Vaelanys and his new hunter friend made their way to Tanaan. And for a few weeks I was doing all the dailies faithfully twice a day on two Mistweavers. I don't know exactly how this happened. Tai finished the reps last night. Vae had his trading post up sooner and beat him to getting the big achievement by a day but it's Tai's in my book. And it's done, so maybe now I'll consider taking some of the others on over.
In the meantime Ailuuya's still got Yrel hanging out in her garrison so I couldn't resist snapping some pictures of their matching armor. Ailuuya even took off her helmet for the occasion. 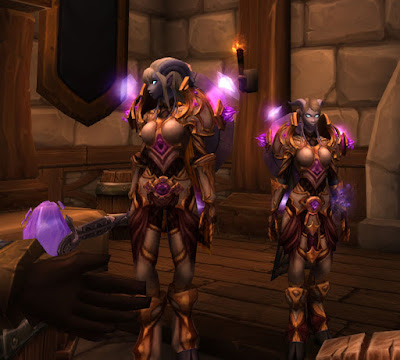 The rest of them will get over there sooner rather than later, I hope, now that the worst of the pressure for running them with friends twice daily is over, even if I would still like to finish out those reps. 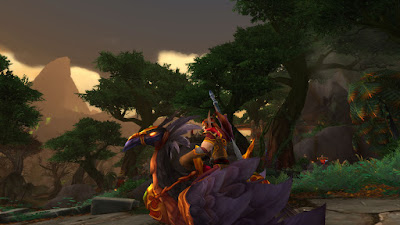 Vaelanys still rides his warstrider everywhere. Apparently it's tougher than it looks or something.
And I hate to shame Tai for his luck, but I feel really bad. It's so hard to get tags on Deathtalon and the rest. They're dead almost as soon as they spawn so it's mainly a matter of getting lucky and being somewhere near the right place at the right time. So Tai and Os have only had a few cracks at them, yet somehow Tai has managed to acquire all the mounts. But poor Os hasn't had one drop yet. I was really sad looting the last one because I couldn't just share.

Posted by PlaidElf at 5:45 PM No comments: