My poor blog has been suffering for posts. Aside from raiding with my wonderful raid buddies and Tanaan most of what I've been doing with my game time at this point in the expansion has been RP and character story writing. So as Kamalia was nice enough to suggest, I thought I'd put up at least a couple of the mostly finished snippets for Vaelanys, my RP server character. This is the first part of the story of how he ended up in Draenor and in command of something. 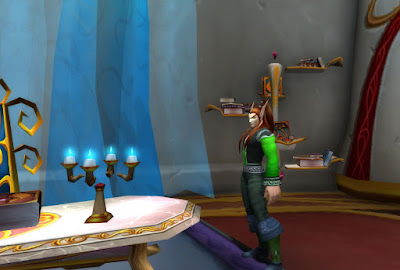 His face hurt from forcing himself to smile. His throat ached from making himself speak charming words, but the party was over, and as he finally closed the door to his chambers behind him Vaelanys's shoulders slumped. For just a moment he let go of the tension of pretending to be happy, before another sort of tension filled him. He crossed the room in two strides, slammed his palms down on the solid top of the wooden desk hard enough that his bones ached for the impact. "Light damn it." He whispered.
The side of his right fist struck the desk a second time, far less violently. He stared unseeing down at the blank parchment on the desk. She'd ruined everything. He wasn't sure if it made it better or worse to know that she'd only meant to help him. Perhaps neither. His breaths were ragged in his own ears, and his eyes prickled dangerously close to angry tears he wasn't going to let himself shed.
He'd wanted, he'd -intended- to go serve the Horde and just march on the Dark Portal with the rest wherever they saw fit to send him. It was what he'd done in Northrend, just turned up and taken the duty they gave him. He'd earn his own way or he wouldn't, but either way it would be something he'd done. It was the first thing that had made him feel like there was a purpose in his life in years.
His mother would never know the effort it had cost him to smile and thank her when she'd handed him the rather crumpled paper now tucked into his belt. He'd probably never know the number of favors she'd called in to get it. Assistant Commander under Damarianth Spearsong. Second in command, of a force he'd never even met, and when he hadn't even left the city since just before Arthas fell. So much for earning his own way.
He just wouldn't go. But the rebellious thought had no sooner formed itself in his mind than Vaelanys rejected it. He couldn't stand to stay. No matter what it cost his pride to go. No matter how wrong it felt. No matter how little this felt like what he'd wanted when he made up his mind he was leaving. He slumped slowly into the chair, one hand coming up to press against his face. He felt like she'd taken something from him with this. After a moment it came to him what that was. His freedom.
Posted by PlaidElf at 12:53 PM