Some of the characters I play in WoW. I have a lot. Possibly an alt problem. But here are the main 90s.
None are listed by their full character names, because most of them are the only one with that name on armory and I'm kind of shy. Plus they all end up with nicknames bestowed by their loving guildies anyhow. All of my characters have personalities and basic backstories, regardless of what type of server they're on. It's a hazard of being a longtime rper and a writer. 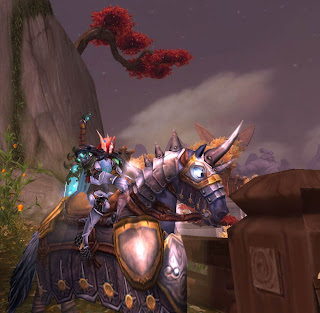 Seish is the main. When my friends finally talked me into playing WoW I knew that I was going to play an elf paladin. So as soon as I got a copy of Burning Crusade, Seish was born. He embarked on many adventures with my friend's warrior Roz and became my main. He was my mount collector and my pet collector in Cata, even though I couldn't master the ret rotation then enough to use him much for dungeons and LFR. In MoP he's currently my best geared character. Having a lot better luck with the ret rotation and feel pretty confident playing him.
Personality wise Seish is really kind of a jerk. He's a war-hardened, cynical zealot of a paladin. He's a smite first, inquisition later, sort of man. And he's also a racist. Like I said, he's a jerk. I love him anyway. 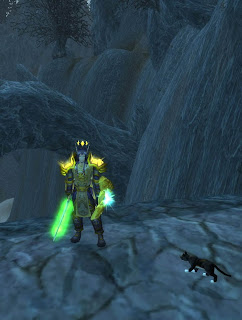 Rim is my prot paladin. He was created when I finally talked my husband into playing WoW with me. Husband finally settled on a blood elf mage to play and since I'd heard horror stories about trying to level mages I decided to make a tank for him. We leveled to 85, then 90 together and we did all our Pandaria reps together. (So many dailies!) Rim's a blacksmith extraordinaire. I really learned tanking in Cata heroics farming all those chaos orbs and I loved it. So Rim's my tank.
Personality wise Rim is the perfect, gentle, chivalrous knight. He is patient, kind-hearted and inclined to think the best of people. He's got a deep-seated and almost unshakable faith and a very idealistic heart. That's his pet cat in the picture. Her name is Speckles. 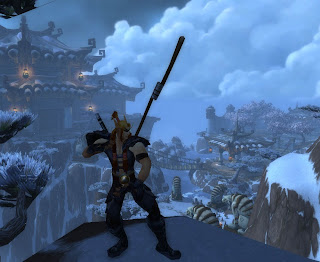 Tai is trying very hard to turn into my second main or even straight out steal Seish's job. He's my only healer and I just love playing him. I knew I meant to level a mistweaver when MoP came out, see if I could find some kind of healing I actually felt decent at, but it was supposed to be an adorable little pandaren girl. Then Tai popped into my head and I made and leveled him with a friend's prot pally. We stopped queueing for randoms around lvl 60 and mostly two-manned dungeons to 90. I don't know if there's much I've done in WoW that was quite as much fun as that.
Personality wise, well Tai's got a long and complicated backstory. But basically he's a tough, scarred up man who doesn't look or act much like a healer. And even healing is something he mostly does right up close so he can punch enemies in the face while healing his comrades. He's likely to yell at you for being an idiot as he patches you up. He's also not that fond of other blood elves. 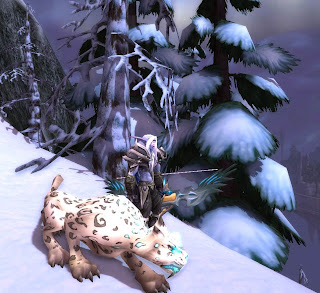 Tyl is my token Alliance character. I wanted to see some of the storylines from the Alliance viewpoint so I made Tyl to let me do that. I love playing him, he and his loyal pet Snowthorn have a lot of crazy adventures together. Sadly not a few of them involve me accidentally flying him into places like the Horde Shrine because my brain is on autopilot. (So far our death count from that particular accident is three.)
Personality wise Tyl's a fairly easy-going fellow. He spends a lot of time adventuring in the wilderness with only Snowthorn for company and when he comes into cities he likes a good drink and a good time. 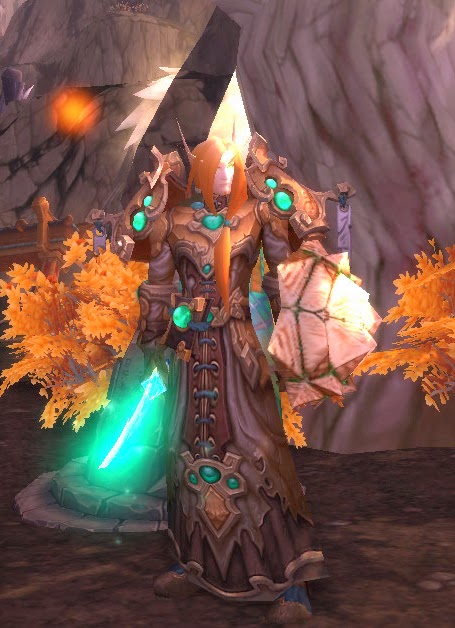 The newest paladin. I wanted to learn to play Holy, since it was the only paladin spec I had no real handle on. Laen leveled almost entirely in random dungeons and now spends his time trying to fix all the injuries he comes across. I've been having a surprising amount of fun with him and he's quickly surpassed everybody but Seish in item level.
Personality wise Laen is a very gentle soul. He'd much rather heal than hurt. He's patient and kind, if rather socially inept. He's a blacksmith so he loves pretty armor, and has a fondness for plate dresses to heal in.


Others
Some of my other 90s. Might add all of them in eventually but for now it's just the two others I've spent the most time on. 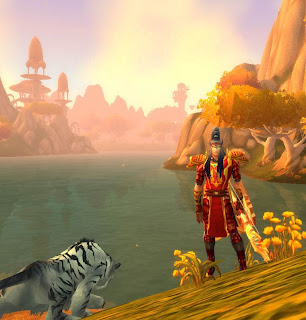 My Horde hunter. He is Survival instead of Beast Mastery like Tyl. Aug's also one of my flashiest dressers as is probably evidenced by his Archer of Silvermoon transmog here. I played Aug a LOT in Cata. He did the most DS LFR runs and was my best geared character. I'd pop on him when I wanted something more relaxing than melee to play. In MoP he's done less, got to 90, maxed his Leatherworking, got the rep for the epic patterns and made a few things for guildies, but he hasn't been geared at all, really.
Personality wise. Aug is Seish's son. He's been a disappointment to his father for not following the path of the light. Still he tries to be the best at what he is and enjoys spending time with his many pets. Unlike Tyl who almost always runs with Snowthorn despite having a stable to choose from, Aug can't seem to stick with just one pet. He's got a stable to choose from and keeps adding to it and is always taking different ones out for a run. All of his pets have Latin names, because I like themes for my hunter pet names. Currently pictured is the back of Efferus, who is apparently a bit camera shy. 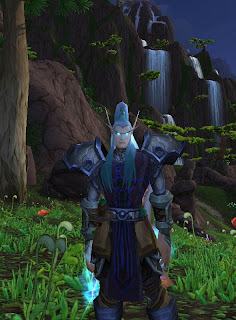 Nyv's my death knight. He was actually my first 85 and my first 90, even though he's not my main. He's sort of the advance scout, largely because I play him solo. He's frost. Unlike my other characters Nyv is never transmogged. That's probably why, even though I went and took pictures of my other characters specifically for this page, for Nyv I just hunted through the shots I'd taken while leveling him and picked one. I played Nyv a LOT in Cata too. He was probably the character I was best at and spent a lot of time vying with guildies for the top dps spot in LFR. In MoP he hit 90 and has mostly retired until the next expansion.
Personality wise Nyv is terrifying. He's a sociopath. He was a sociopath before he was a death knight and as you can imagine being transformed into an undead killing machine has not improved that. He has almost no emotions at all, no empathy, no pity. He'd kill his last remaining family member without batting an eye. He doesn't make much attempt to disguise this, though once in a while he tries briefly to observe some norms of behavior often with results that are somewhere between frightening and hilarious. (Don't flirt with Nyv. He just might mail you bits of his slain enemies for months after. Whether this is an attempt at emulating courtship, or a threat... who knows.)