This week in screenshots 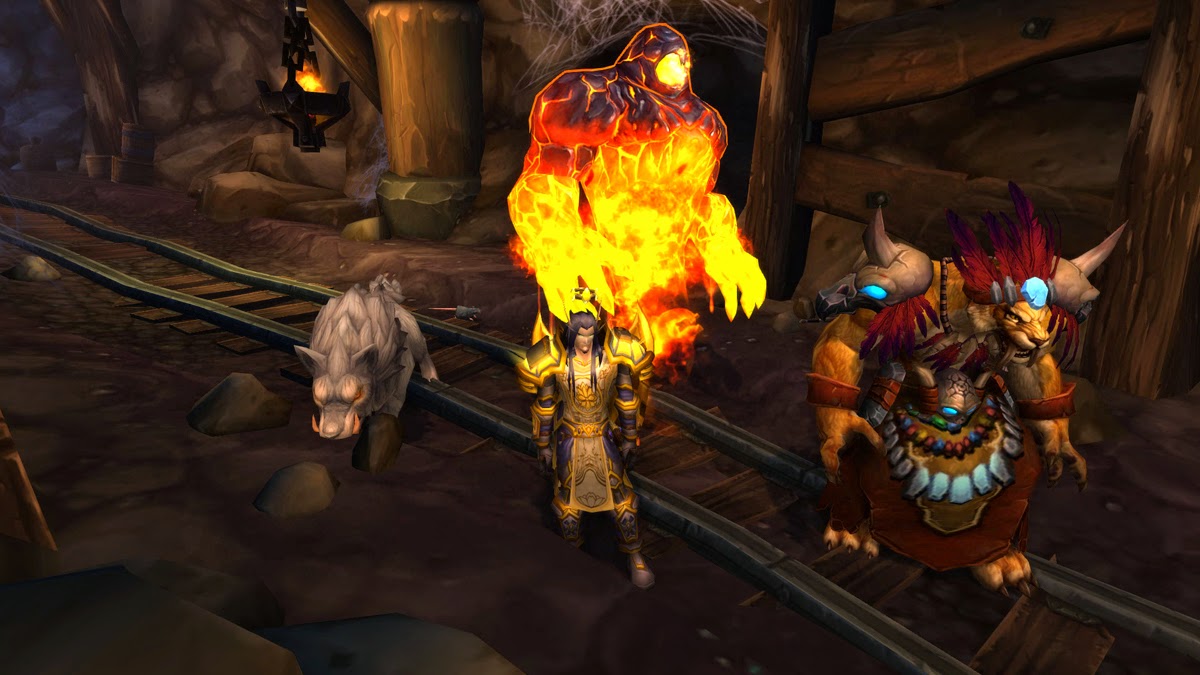 You don't want to be the goren that interrupts Rim at a mining node. You just don't. 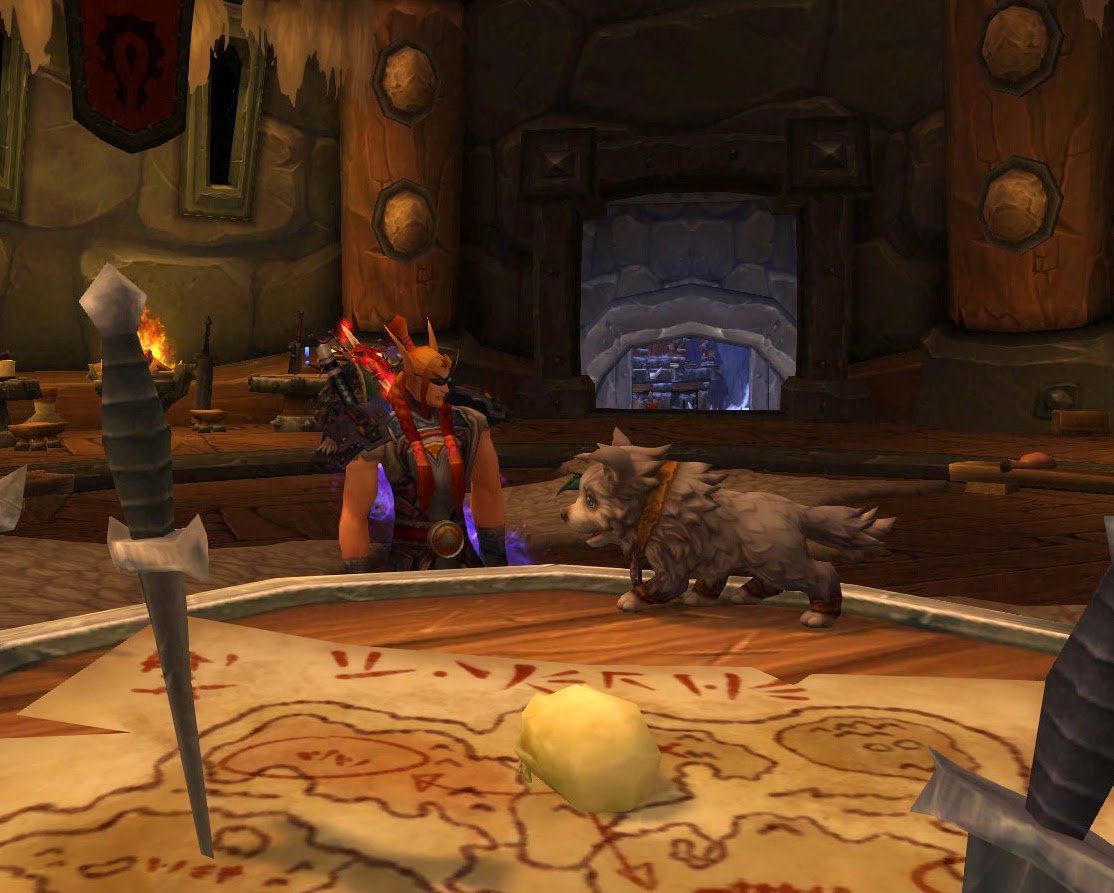 "Someone get this puppy off my command table!  I need to see the maps... Oh alright, never mind, it can stay." Tai's kind of a sucker for little ones of all shapes and sizes.
Posted by PlaidElf at 9:19 PM No comments:

It took me a while to get the PTR working but I finally got to go in and have a look. I looked at Thera too, but plenty of people have gone over the changes to female Blood Elves so I'll just skip right to the guys.
I -really- want to like the new models. This is my favorite race to play and most of my favorite characters are male Blood Elves, so I feel like I'm trying maybe a little too hard to look at these in a positive light. There are things I love. New animations are more fluid... the run's a little different but not the goofy run the male Night Elves had been saddled with (and which they fixed in the PTR, Huzzah!). The new hands look great, the body is really well done, definitely an upgrade. But the faces... well...
I understand that they're not done. They're all apparently using the same geometry right now and so I am -really- hoping that all the things I really dislike in this new face will be confined to one option and not over all of them the way they are now. Now we get image heavy, and we'll start with the one I feel most okay with.
Here's Rim, the perfect knight.

He seems close. A little crankier than I think he looks in live maybe but the beard and hair do a good job evening out any flaws in the facial structure, so I think I can live with this for him, though I wish he looked less frowny.
It's all progressively downhill from here. Here's Laen, the gentle one:
I really like his hair. It's beautiful. So very beautiful. But he looks so cranky and arrogant that I have a hard time seeing my Laen in him.

I can't decide which of these last two bothers me more. Here's Tai:
First of all I think Tai's face is my favorite of the male Blood Elf faces in Live. It's certainly the one that's right for him. It looks dignified, strong, not as young as some of the others but still handsome. I like the set of his mouth.
The PTR version looks nothing like that... it's got the problem all the PTR faces have... which is next to no lips, cheeks that are a bit too wide and a mouth set too far up the face. It doesn't look like Tai. I do like the hair, except for the fact that it doesn't move. Tyndellan has the night elven version of the same hair and his braids sway a little when he moves and actually lift and fall again when he jumps. Tai's never move, they may as well be solid. I hope that'll get fixed before it goes Live but even if it does I don't know if I can live with that face... and none of them are enough different from it right now for me to fix it. I really hope that's going to change.
And then there's Seish:
His hair looks neat. I think that that... and the fact that this one makes it really easy to pick out the stuff that's the problem with all the male blood elf faces in the PTR right now is about the extent of what I can say that's positive. This one makes it pretty obvious to me that I think the eyes are maybe a tiny bit too small. Not a deal breaker by istself. But he's got too much chin. I feel like the nose could be a bit longer and the mouth a bit lower on the face and it would be fine.
But it's not. He looks insufferable and smug, even beyond the amounts of sort of insufferable and smug that he actually is, and that's saying something. I want to like these models. I'm okay with Rim's. I could work on being okay with Laen's but Tai and Seish... I have a really hard time with. All I can say is that I hope they're listening to what little feedback has been given on the male blood elves and that they'll change up the facial structure a bit for all of them and then make them different.
I do have to wonder what it is with Blizzard and putting giant chins on everybody. I'm not freaking out right now, I'm reminding myself that they're still working on things and that hopefully they'll tweak stuff to make them better before they go live. I'll happily wait another month or so for that. And they -did- fix the male night elf run, so there's hope.

If this was Aug's Blog we'd call it 'Plenty of Pets'

I've had some form of cold or creeping crud since about the week before Christmas. But now it's finally better and I've taken some time from all the garrison chores to actually make a post about the things I've been up to. I'm surprised it's taken me this long to start really focusing on leveling another alt, but then I got three to 100 at about the same time and that's a lot of garrison chores. Still every hunter has his day and Aug's getting his turn. He's leveling, but also taming his way across Draenor. 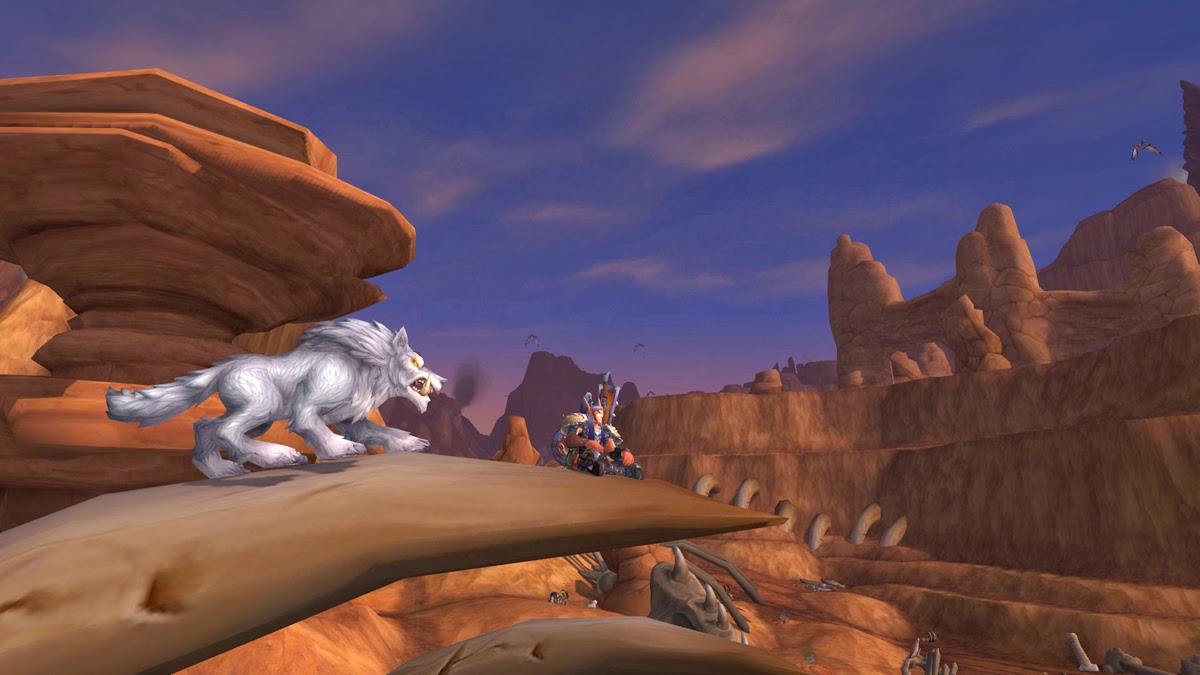 He made a new Frostwolf friend in Frostfire and named him Gelu. Gelu kept him company through most of Gorgrond too, and partway through the Gorgrond chain I realized that Aug didn't have Snowpaw in his garrison yet, so everything else had to be dropped until that got remedied, if only so screenshots like this could happen. 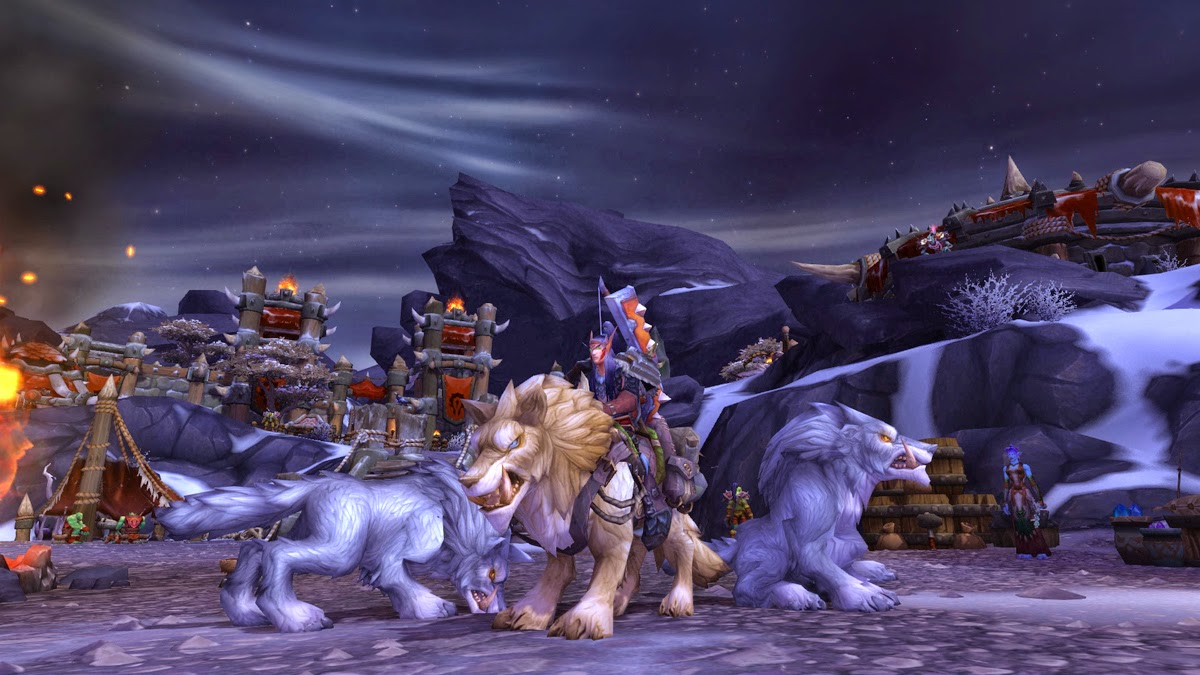 Tai is the one that made the harness for that wolf but since he won't give up his tiger Aug got to steal the mount. It's a win for everybody. (I'm a little bit sad that only leatherworkers can ride that wolf because I really like it.)
In Gorgrond Aug found another new friend. 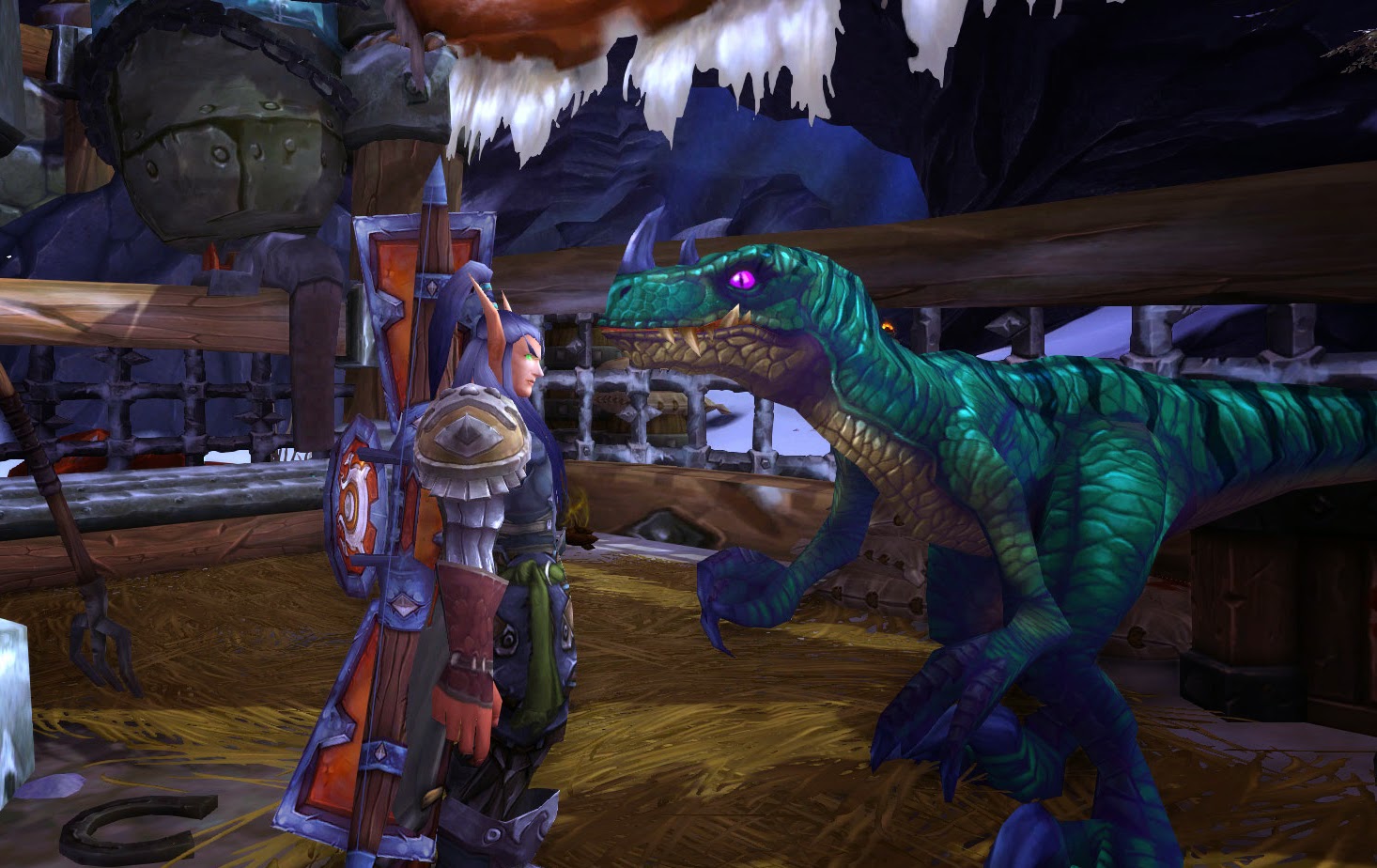 Laetus has done a little helping out with the barn, though mostly he's on passive for the trapping and is just moral support. I really didn't want another barn, but then Rim wanted to upgrade his shield and I realize that no matter how much it irked me I was going to need at least one barn on every server where I leveled a crafter. Well Tai's got his server covered. Aug will do he and Rim and Seish's. Tyl will be needing one and Ailuuya replaced her lumberyard and upgraded it all the way up yesterday. I doubt I'll be quite as good at keeping hers full as I will for the rest of them. She's lucky enough to be raiding and may well replace her crafted jewelry before I can upgrade it anyhow. 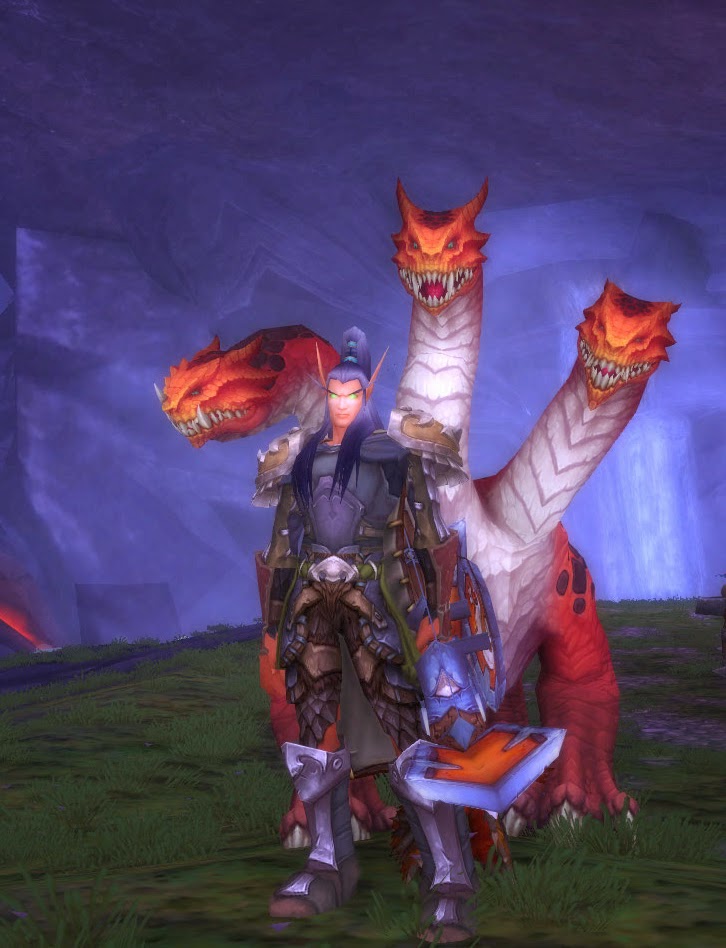 Aug meanwhile has moved on to Talador where of course he promptly found a red hydra he -had- to tame. This one got a little bit complicated. There was an argument between Aug and Magister Krelas about the best thing to do with large red hydras. The silly mage kept interrupting his tame and insisting they should just kill the thing. I think he underestimated the lengths a hunter will go to for a pet he wants. Aug moved on, away killed some ogres and let Krelas and the hydra argue it out. Once the hydra had predictably won Aug tamed him, helped Krelas up, and off they all went together. I suppose Aug must have apologized because at the end of it all Krelas was still willing to come work for him so I guess there are no hard feelings. Aug may need to swat Servius over the noses a few times to get him to stop looking at the Magister like he's a meal, though.
I wish I could say Aug had collected all the Draenor pets he wanted, but there are still a couple of beautifully colored tigers calling his name. I'm going to hope we can get it all out of his system before Nagrand.