I saw that Dragonray had asked about people's favorite and least favorite mounts. Well, since mounts are one of my very favorite things, how could I not make a post about it?
Most of my characters have individual favorite mounts, in fact one of my favorite things to do on new alts since account wide mounts is to go through the list and pick them something special to ride while they level. So before I get into favorite mounts overall, here are the main four I play and their personal ground mounts.

Seish has his Argent Charger. Not only is it a paladin mount, but it is the only mount since account wide mounts that only Seish has access to. So when he's going for a ground mount it's almost always this one: 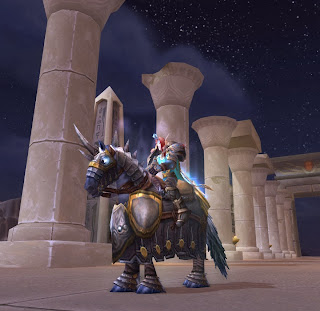 Tai has his Shado-Pan riding tiger. Rim was exalted and had bought the mounts before Tai was created, so I think this is the only ground mount he's ever ridden. It even has a name, and I can't let anybody else ride it because it's Tai's. Not even Rim, though he's the one who earned it. (Tai did go grind up his rep with Shado-Pan too as soon as he was 90, so it's his fairly now.) 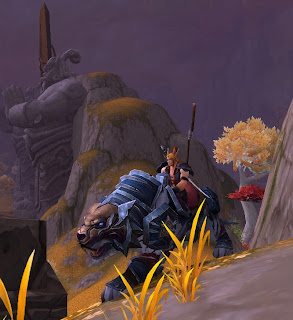 Rim usually rides the Headless Horseman's mount. He won it before they were account wide and it's so handy for farming ore and just getting around in small spaces quickly... and it works as a flying mount too. Rim's also the one who got the drop from Kara so I think he's got a strange affinity for creepy, fiery-hoofed horses. 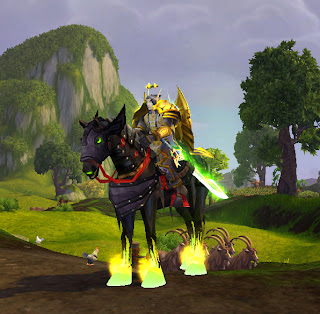 Then there's Tyl. He's been my main Ally for so long that he rides a wider variety of mounts than most. He likes kitty mounts, but one of the mounts he rides most is the Quel'Dorei steed. After all part of the reason I first started leveling Tyl was because I wanted a freaking unicorn and only Alliance get them: 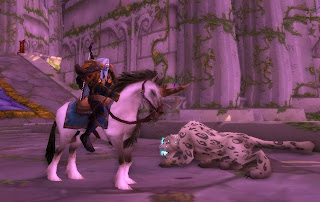 Overall there are a lot of mounts I just love. Seish's count is up to 182 and very slowly climbing as I get around to doing dailies for the last few tournament mounts and the dragon from Tol Barad and slowly save gold for more of the JC mounts. I love a lot of them and could write entire posts about bunches of mounts, but I made myself weed through and pick a few of my very favorites.

1. Talbuks. All the colors of Talbuks. They were one of the first rep grinds I ever did on Seish because as soon as I saw them I wanted them and I still just love them. I don't have the pvp ones yet... someday. 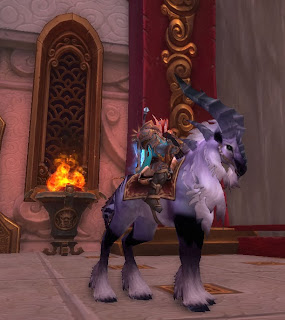 2. Dragons in general. I like all the colors of the basic drake (still need a blue one and want to know why there isn't a green one.) But specifically this one is the most gorgeous colors, and my friends and I all worked together to get each of us one, so it's special. 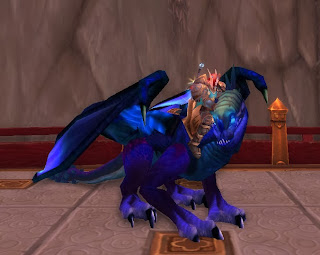 3. The Onyxian Drake. I'd seen people on them before but figured I'd never have one so didn't look at them closely enough to be impressed until I actually managed to win one. It's so cute! Seish rides his a lot. 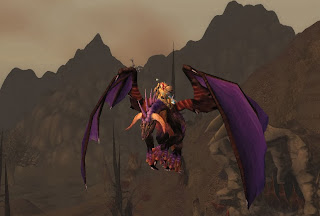 4. Hippogryphs. I've got all I can get in game(not TCG ones) except the Recruit a Friend one. Someday I need to find a couple of people to recruit because I want the zhevra and that emerald one. They're a nice compact size for farming stuff on and they're just such a neat design. The Flameward Hippogryph is my least favorite of them. I can't decide which one I like best. Seish has a macro to summon a random hippogryph on his sidebar. 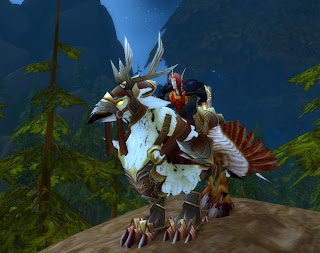 5. Cloud Serpents. I wonder if I'm one of the only people who actually loves them, crazy wiggly flying and all. I've done the grind to ride them on almost all of my 90s and actually do use them a lot. They are terrible for landing in specific places for farming, but for long flights I find them entertaining. And I like just looking at them because they really are beautiful. It probably helps that I don't get motion sickness. Tai, of course, rides the onyx one: 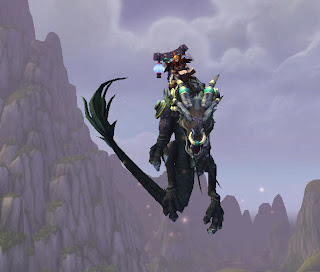 Honorable mentions: Paladin mounts. I love them.
Dragonhawks. Some of my blood elfiest blood elves ride them a lot, though I think the blue one alliance get is my favorite.

Least favorite mounts: I don't like the undead horses from Undercity. Though the white one from the tournament is kind of neat. I'm not fond of kodos or elekks because though I like the way they look and even though I know it's just my perception they feel slow when I ride them. I have the same problem with the Pandaren turtles. I also don't like Tyrael's Charger. I really want to like it, because it looks neat, but the legs are too short for a horse and the animations are weird and it bothers me.
Posted by PlaidElf at 12:44 PM